Space combat usually takes place when the player randomly encounters a hostile Pirate, Retro or Kilrathi ship. Sometimes an enemy can be persuaded to break off their attack by communicating (C key) with them, however that only works if they are only mildly hostile, e.g. in case of a Confed or Merchant you hit with a laser or bumped into accidentally. 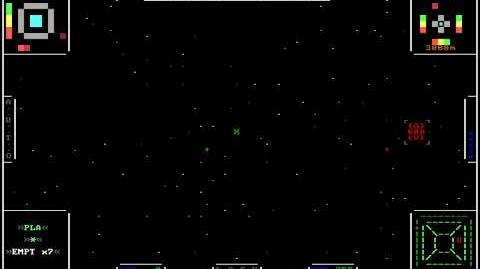 Other than with character combat there is no special mode for space combat, it takes place in real time. Fly as usual (except that the autopilot A key is blocked) and hit Space to fire your front gun. It shares energy (red dotted bar at the top) with the afterburner, so use the latter sparingly during fighting or you won't be able to fire. If your ship has a turret and you've bought an Energy Capacitor for it then its supply is independent from the front gun. Use this. When main power is depleted turn the ship to allow the turret to fire while main power recharges. The turret's fire rate dropping tells you its capacitor is empty and it's time to turn around again.

Turning the ship also has the effect of exposing different parts of your shields to enemy fire. The cyan square in the top left corner represents your ship. The gray bars surrounding it indicate the ship's armor. The colored bars above, below, left and right of that stand for the front, rear, left and right shields respectively. As soon as the armor starts to take hits (i.e. not only after the armor is gone) essential ship systems start to get damaged. Therefore, when main power is low, it is advisable to turn the ship while recharging even if no turret is installed.

Damaged systems perform worse, e.g. damaged thrusters slow down the ship. The R key shows which components need repairs (light green is undamaged) and Shift-R chooses which to repair first if a Repair Droid is present. G or W switch the bottom left corner back to the default gun/launcher display. W also toggles between weapons, e.g. if both Friend-or-Foe and Disabler Missiles are available.

Hitting an enemy ship auto-selects it as the current target, just as could be done manually with the T key. The radar in the bottom right corner now represents it with a double line cross and the usual destination indicator in the top right corner now shows the targeted ship's shields and armor. On the main viewer the target is surrounded by dark gray corners while your ship is pointing away from it, or a full box when aiming at it.

Pressing L locks the target, meaning hitting a different ship won't auto-select it any more, only T still will. The line corners surrounding the target on the main viewer turn light gray. Once target-locked, aiming at the enemy starts acquiring a missile/torpedo lock, shown by white dots in the top right corner. After a few seconds the word LOCK and a fully light gray box on the main viewer indicate you can launch a missile/torpedo by hitting Enter. You can of course always launch with Enter, even without a lock, but in that case the missile will just fly straight without tracking.

Enemies patroling a Nav point usually notice you at 30000 m - one after the other if you're cautious. When an enemy ship approaches from a distance, you can target it as soon as it appears on the radar and will start acquiring a lock when it has closed to 8000 m. This means that, depending on your and your opponent's speeds, you can often fire a missile at them before they manage to come into gun range, as long as you're not flying too fast to meet them.

Instead of destroying a ship outright you can also disable and board them. To accomplish this wear down their shields until they are completely gone on at least one side. Then fire 2-3 Disabler Missiles at them when facing a fighter, or half a dozen EMP Torpedos in case of a capital ship. The cyan dot in the center of the enemy display in the top right corner will get darker and eventually gray as your opponent's core systems are hit and grind to a halt. It will take a while for the crew to repair the damage, so no rush, but you can't wait forever, either. Approach the (still targeted) ship and stop right next to them to dock.

You will find the two ships connected by a boarding bridge, which you can cross and initiate character combat. Then you can kill or stun and arrest the pilot and crew, steal their equipment and even walk to the opponent's cargo computer and transfer their cargo. Sadly, however, it is not possible to pilot the captured ship instead of your own.

Community content is available under CC-BY-SA unless otherwise noted.
Advertisement